Shame on me, but I really don't pay attention to things like privacy settings, terms of use, or any other fine print when I add myself to a service. I typically wait to see if there's a backlash from the community and then I act accordingly. This particular issue snuck up on me, though, and I didn't even realize what I had done.

My Facebook profil is fairly open to anyone who would like to connect. I'm a social person and I really don't have any secrets (or money for all you hackers out there), so I connect with everyone. About the only exception to this are geolocation tools. I think it's kind of creepy that people I don't know and live in some other state care about where I check in.

What happened within minutes was that people unfriended me… along with a deluge of comments on what a jerk I was. (The irony is that I let the person who did it know that I was disappointed in them). So, because of one person in my network lacking any kind of decency, I've had to lock down my permissions. I still am allowing friends to post on my timeline… but no one else is going to see the information. To get to this screen, click the down arrow in Facebook (top right this very moment) and then select Kako se povežete. I've circled the two settings I've updated. 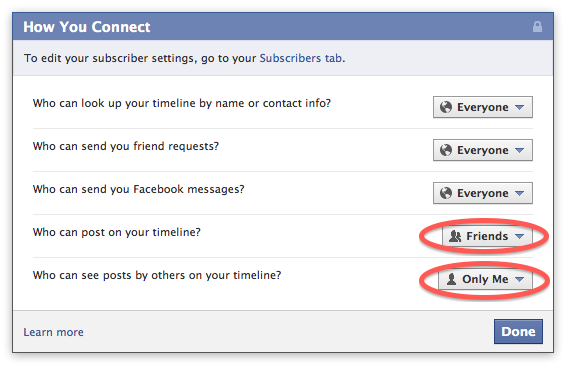 For you Facebook gurus out there, does this also stop any content from making it to my wall from another persons' wall that I comment on? Or will this do that?